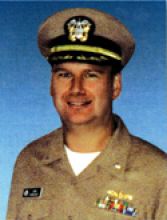 CDR Schlegel was originally from Gray, Maine. He was known for his keen wit, forthright nature and avid interest in ice hockey and football. CDR Schlegel carried on a Navy tradition deeply embedded in his family as his father and two brothers also served in the Navy. CDR Schlegel was devoted to his wife, Dr. Dawn Schlegel, and shared many wonderful memories of their times together in high school, college and 13 years of marriage. He lives on in the hearts of his many friends, colleagues and family.

A Living Memorial to CDR Schlegel is below:

I could not have imagined the impact that participating in TSP would have on me. Last weekend, I had the honor of carrying Naval Commander Robert Allen Schlegel’s memorial stone to the summit of Cadillac Mountain. I learned about TSP from a dear friend who was completely moved by her involvement in the 2014 Memorial Day Weekend hike at Katahdin. I was intrigued and signed up, in full support of the premise that our soldiers should never be forgotten.

While I was without any connection to the military or military families in my present day-to-day existence (until last weekend!), my upbringing was certainly shaped by several missing ancestors. Most directly, my father grew up never knowing his father, who was killed in WWII when he was just 6 months old. I faithfully wore the POW bracelets in the 1970’s given me by my mom and dad during Vietnam. I was in elementary school, but well aware of the fear, anxiety, and loss all around me.

Fast forward all these years to Cadillac Mountain on October 4. I learned as much as I could about Rob Schlegel before that day and was overwhelmed by the experience. Rob was killed on 9/11 at the Pentagon at a moment in time that I will never forget. None of us will ever forget in our own personal ways. But the fact that I was assigned to carry his memorial stone is particularly amazing to me.

Now, there is no way that anyone could have known the common interests I share with Rob. We were the same age on 9/11, we both shared an interest in higher learning and international affairs, loved Maine and our families. Everything I have read about Rob – the tributes from colleagues, and especially his wife, leads me to believe that he was a sentimental, down to earth, and caring person. And he was witty and funny too! Qualities we all strive to emulate.

Moreover, in researching Rob, I learned that his college fraternity started a scholarship fund in his name after his death. Rob graduated with high honors from Washington & Lee University in Lexington, VA, and went on to achieve a Masters in International Affairs. The “Schlegel Prize” funds students at W&L to attend “conferences on foreign affairs.” Well, I happen to direct a prominent foreign affairs Conference right here in Camden, Maine.

I believe that the fact that I was assigned his stone is no accident. My hope is that I can provide a link between students from Rob’s Alma mater and the Maine that he loved so much! I can think of no better way to continue his memory than to bring like-minded students to Maine to learn about foreign affairs – a subject that Rob held dear. I truly hope to facilitate a connection between The Summit Project, Rob’s family in Maine, and the Schlegel Award – all together in some extraordinarily meaningful way.

I am forever indebted to Naval Commander Robert Allen Schlegel and his family for their sacrifice and grateful for this opportunity to keep his memory alive.

The bonds created last Saturday and the support I received from my Team Kebo colleagues were incredible! In just one day, I gained lifelong friends and comrades whom I hold close to my heart forever. Thank you to Major Dave and The Summit Project!

TMCV reminds our readers that The Summit Project, the families of the fallen, and the hikers providing these living memorials are not associated with The Maine Conservative Voice in any way and do not necessarily endorse, condone, or validate the views, opinions, and agenda regularly expressed by TMCV on this web blog.  Warrior Wednesday is simply an opportunity, once a week, to honor Maine’s fallen heroes free from political intrigue and strife. The Summit Project does not identify with a political party or idealogical persuasion. TSP reveals the character of Maine, a character of service, sacrifice, duty, and Patriotism. Please support The Summit Project and all they do for Maine’s fallen heroes.